GM devo – good for our health?

It’s not the prettiest word, but GMdevo (formerly devoManc) is going to play a critical role in the future of health and social care services in the Greater Manchester area. 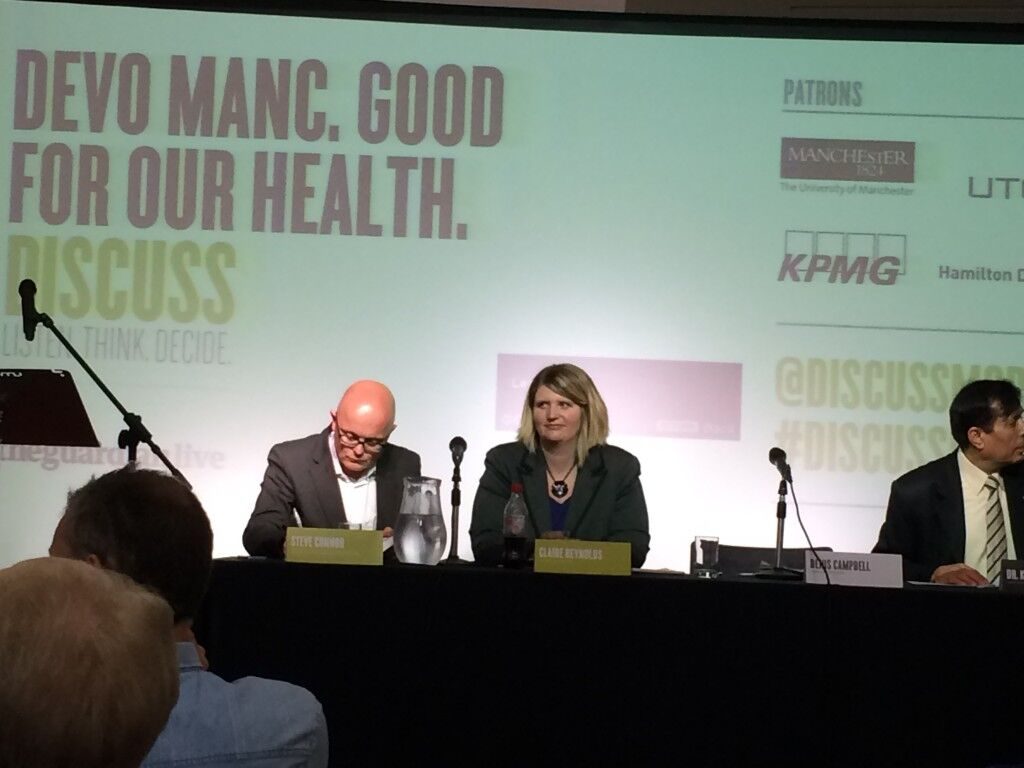 As part of a ground-breaking devolution deal with government, in April 2016 Manchester will take direct control of the £6billion currently spent on NHS health and social care in the region.

But opinion is divided on whether the initiative is good news for the health of the region or a political headline-grabber.

Supporters and opponents battled it out in a passionate and well-attended debate hosted by Discuss Manchester and the Guardian earlier this month. As a communications business with a strong healthcare client base, we listened with interest.

Speaking to around 200 people in the audience, devolution supporter Claire Reynolds, a councillor at Tameside Council, argued passionately that local control over budgets and decision-making had to be better than decisions made by ‘anonymous suits’ in London.

She argued that political opposition to the move was wrongly focused on the messenger rather than on the opportunity, which she saw as a very real one that could make a meaningful difference to people’s lives.

An opportunity to do things differently

For him, it was a chance for Manchester to seize control of its own destiny and show how it could do things differently.  In particular, he wanted to see a shift in how public resources are allocated – with more money invested in ‘fences at the top of the cliff’ (promoting good health) and less in ‘ambulances at the bottom’.

A less rosy picture was presented by two heavyweight opponents – Dr Kailash Chand, deputy chair of doctors’ union the BMA, and campaigner David Fernandez-Arias, who fought against the closure of the A&E department at Trafford General Hospital.

Pressure on funding for public services

While supportive of the principle behind the devolution of health and social care budgets, Dr Chand had a number of concerns, including:

The debate concluded with a hard-hitting performance from David Fernandez Adams, who presented GMdevo as “treasury-led fiscal decentralisation, not democracy”.

For him, the lack of public consultation around devolution was a huge concern, and flew in the face of the NHS’ promise of ‘no decision about me without me’.

He questioned whether the devolution deal would actually transfer power into local hands – or would simply mean Greater Manchester jumping to the treasury’s tune to unlock the cash it needs.  He questioned the transparency of the process and raised particular concerns over the election of an interim Mayor with no public consultation.

The ensuing debate was fierce and passionate, with the naysayers largely drowning out any positive comment.  Concerns were voiced about protecting jobs and budgets and there was anger at the lack of public consultation to date.

However, two voices managed to cut through the noise in favour of devolved health and social care spending.  One, a representative of Oldham Council, rejected the accusation that work was being done behind closed doors and highlighted the real appetite for change among the 10 local authorities, who she said were working closely and positively together – through open debate.

Former hospital trust chair Peter Mount highlighted the need to be able to make rapid decisions in order to drive improvement in local health services. “If DevoManc can do that, I’m all for it,” he said.

The final votes revealed an audience that was split down the middle.  While the ‘yes’ vote won with 48% of the vote, 42% voting against indicates that there is still a lot of work to be done before the residents of Greater Manchester are convinced that GMdevo is indeed good for their health.

Read the Guardian’s article on the debate.

Team IC was out in force at the Health and Social Care Innovation Expo 2017.  What did our specialists make of the announcements from the stage?

We are pleased to announce three client wins in the health and social care sector – a key area of expertise for us here at Intelligent Conversation.

Pride, pressure and possibility: the future of the NHS

How can we solve the future challenges of the NHS? Senior Consultant Natalie Lanyon reports back on a high-profile lecture from the man at the top.