A new dawn, a New Day, a new newspaper

The New Day, Trinity Mirror’s new national newspaper, launches across the UK today (you can still pick up a free copy if you hurry). To mark the launch, we’ve picked out 10 need-to-know facts about the new 40 page, Monday-to-Friday title. 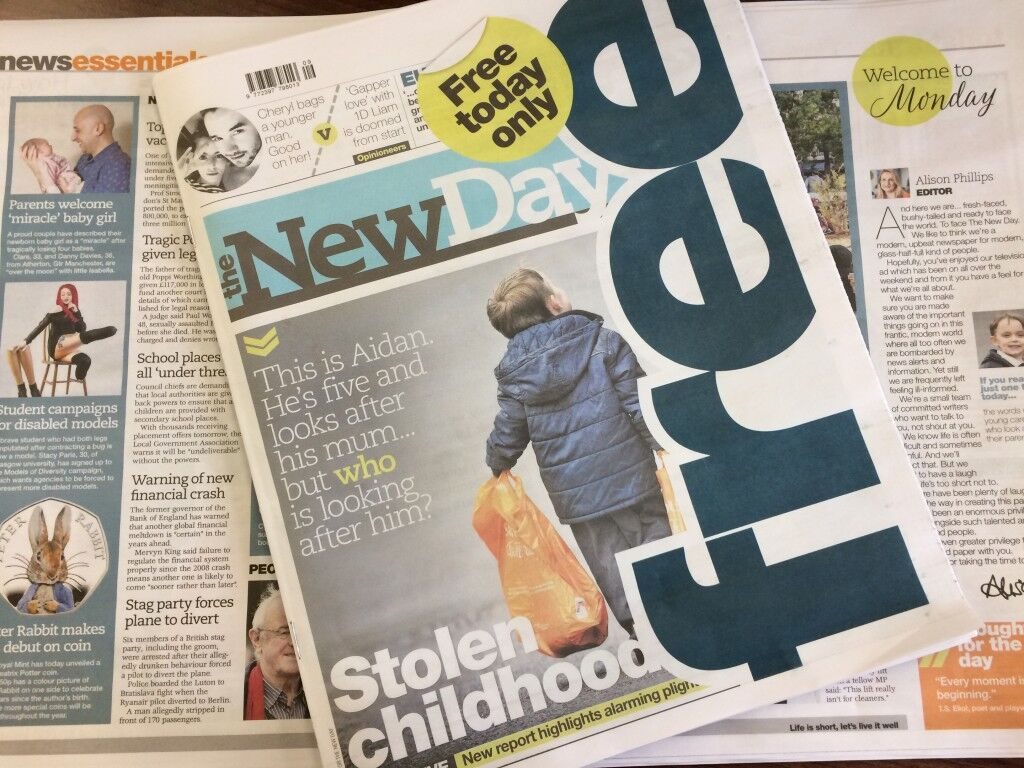 Instead, the New Day will have a strong social presence on Twitter and Facebook. The newspaper plans to use opinion and comment from across its social media channels to create user generated content. In other words, it’s aiming for content that people have said they want to read rather than what the paper thinks people want to read.

This is much cheaper than broadsheets such as The Guardian (at £1.80), but a similar price to the tabloids like the Daily Mail (at 60p). The New Day’s closest rival, The i, is 40p. For the first two weeks you’ll be able to pick up the New Day half price, a move intended to help the title build up its audience.

The publisher has over 260 titles ranging from national to regional, along with their accompanying websites. Its main title the Daily Mirror is facing stiff competition from the 20p Daily Star so the launch of the New Day could be a way for them to reclaim ground lost to the red-top.

A relatively large number for a newspaper these days. Many will continue to work on other Trinity Mirror titles at the same time, while others only have three month contracts, such is the uncertainty of the project.

Phillips will still keep her role as editor of the Sunday Mirror, however she says the New Day will have an altogether different approach: “There are many people who aren’t currently buying a newspaper, not because they have fallen out of love with newspapers as a format, but because what is currently available on the newsstand is not meeting their needs. We’ll tell you everything you need to know and we won’t sensationalise or terrify you with the news.”

Although we wonder if, with the title’s planned focus on social media, it is likely to attract a younger audience than they anticipate. Reader research has informed how the paper will take shape. Phillips said: “Most people, and we have spoken to thousands of readers over the last year or so, only want 30 minutes, they only have 30 minutes, everyone is time poor nowadays.”

There was surprise in many quarters following the announcement of the New Day’s launch. With the print industry in decline and The Independent shutting its doors it seemed a strange time to launch a new print-only title. But Trinity Mirror says it’s creating a print title that reflects the changing nature and digitisation of media. Chief Executive Simon Fox told the BBC: “We very much hope we will be able to arrest some of the readership decline.”

Not only does the New Day aim to include high quality, user generated content, it will also be printed on thicker-than-normal paper stock with a modern, clean design. Editor Alison Phillips said: “This paper has been created as a result of customer insight and is the first newspaper designed for people’s modern lifestyles.”

It will give a balanced view of news giving readers a chance to make up their own minds. It will be interesting to see how this approach works, especially in the lead up to the EU referendum.

The new title shares its name with a Christian youth festival and a set of WWE wrestlers.

The closing of The Independent launched a flurry of speculation around the future of print media, but it looks like publishers aren’t done with print just yet. With its focus on user generated content and quick, snappy reporting, is the New Day a front runner of a new kind of print title?

Alison Phillips says: “Whilst we have continued to put newspapers out in a fairly similar way for 100 years, there has been a massive nuclear bomb gone off in the media world with the advent of the internet, and we have created a newspaper which reflects that and understands that.”